I originally painted the panda mural in 2010 to cover up offensive graffiti on the Gazzam Lake water tower. Although I was concerned about making “unsanctioned” public art, I felt someone needed to take action to improve the look of the water tower, which was such an eyesore on an otherwise beautiful wooded walk.

The original inspiration for the mural came from an online game of photoshop tennis I was playing over email with an artist in the UK, screen name “Bugdozer”. He and I met doing photoshop contests on fark.com and posting altered pictures back and forth was a common pastime amongst the fark photoshoppers. I had wanted for a while to move Bugdozer’s and my game from the digital into the real world and I saw the opportunity while also performing an act of artistic community service. Besides creating a cheery image for people of all ages to enjoy at Gazzam Lake, the mural has had other great results, including that Bugdozer and I were married in 2012!

There is always a risk with street art that it will be negatively-altered or suddenly gone. I painted a mural in Birmingham UK a few years ago that I absolutely loved that was covered over with a giant tag. It really depressed me and after that, I decided unless there’s an art emergency, I’m not doing more street art. (I decided since writing this blog post that my mural being painted over does constitute an art emergency and I will remedy the situation as soon as I am able when I’m back in the UK, please stay tuned for a follow-up…)

There have been various alterations and additions to the panda over the years. Someone added a quick sharpie marker mustache to the panda ala Duchamp’s Mona Lisa, which I found extremely funny. That faded away over time and most of my original “extras” around the periphery were painted over. I view the situation as a collaboration and continual work in progress I’ve had to touch up the panda over time, between offensive graffiti and the elements. It was defaced at least three times with red spray paint saying Trump. Other people have come and touched it up, so there are a lot of layers and I try to leave what I can of other people’s work if it adds to the piece and I always try to improve.

At one point, someone painted completely over the Bugdozer and about half the panda’s body with black paint, maybe to cover a trump graffiti. Luckily, I was on Bainbridge Island at the time because if I hadn’t acted quickly to restore it, the panda might have been gone for good.

I was able to touch up the face, roughly restore most of the body and add a crystal ball place-holder where the bugdozer had been before I flew home to the UK, where I had several months to think about what changes might be made.

The panda and the bug are best friends, so it was important that the bug return. The original ‘dozer had a small, sparkling pink ball in it’s shovel which has now magically grown to replace the machinery. If one looks closely, the pink dots can be seen to spread out and around the water tower. I did my best to respond to what other people have done on or near the panda and relate to the art around it. I have some more ideas that will have to wait for warmer, dryer weather next spring, so stay tuned!

Whenever I discuss street art and graffiti with anyone, especially young people, I believe it’s important to differentiate between positive street art that is creative and improves an area and negative vandalism that damages or destroys an area. One should never paint over nature, over pristine brick or rock or in a way that makes a place less beautiful. Only improve. 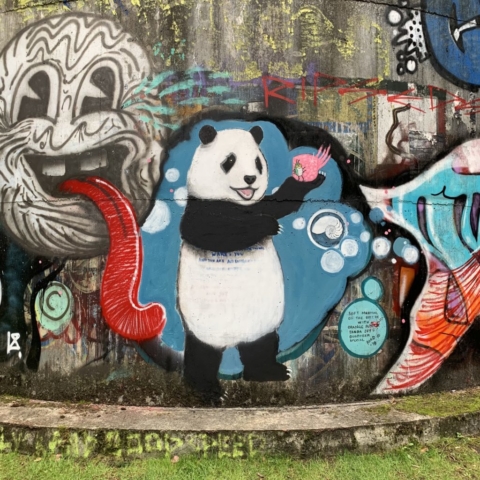 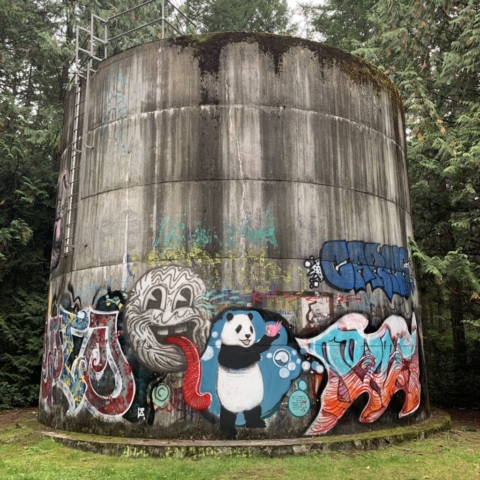 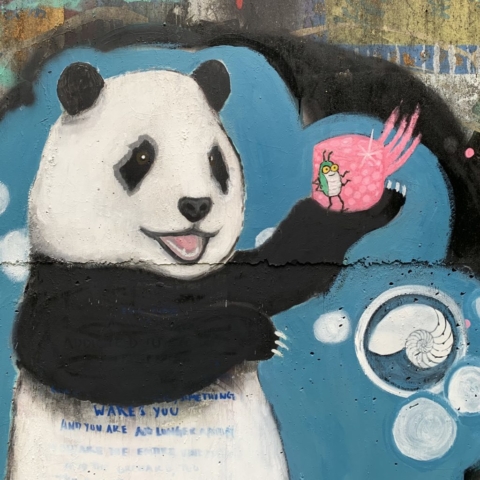 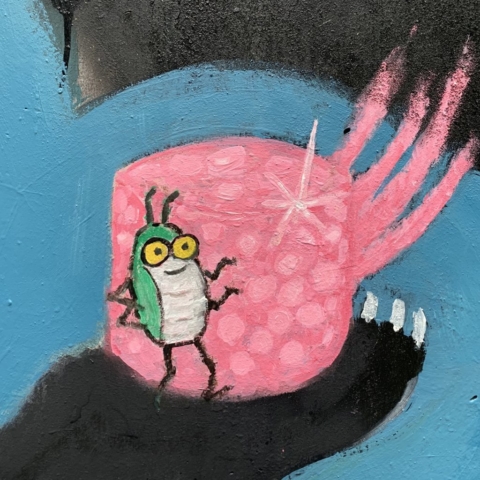 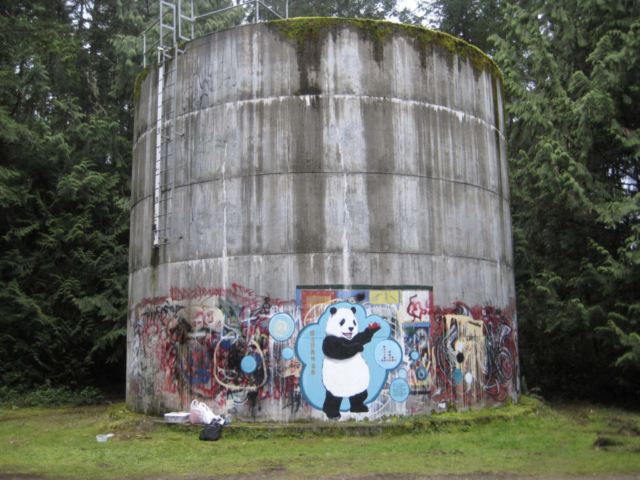 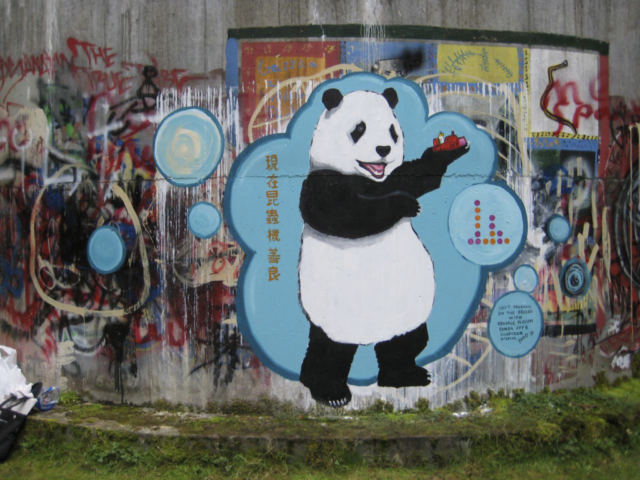 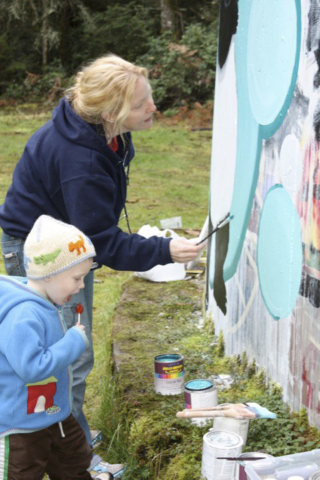 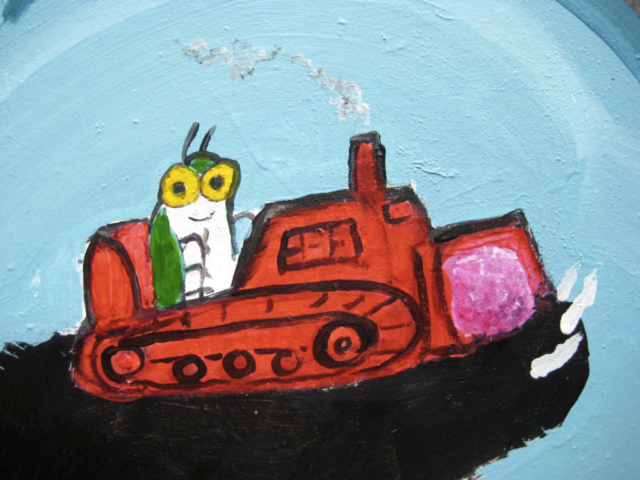 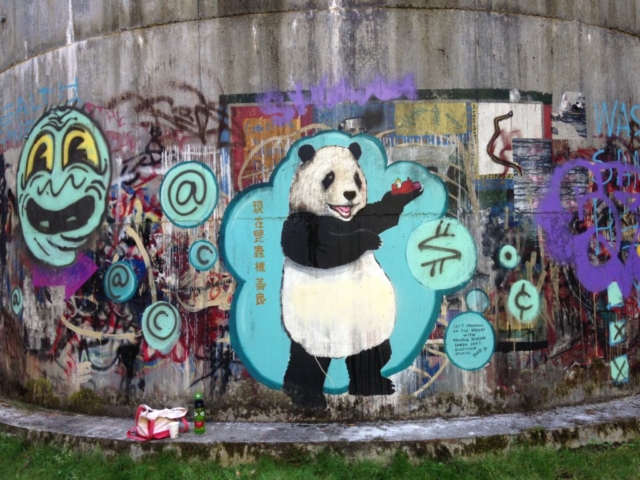 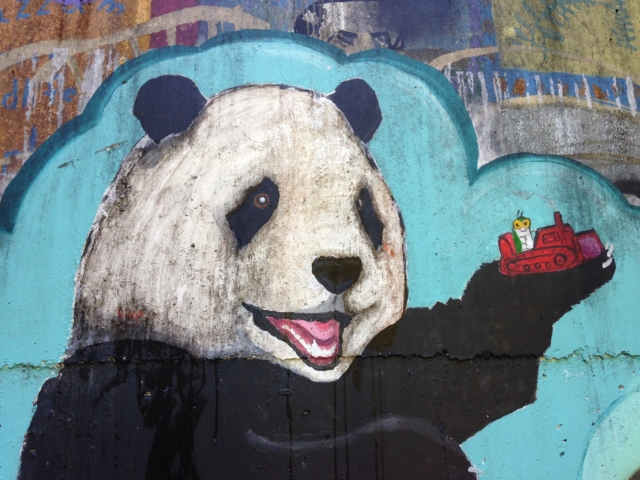 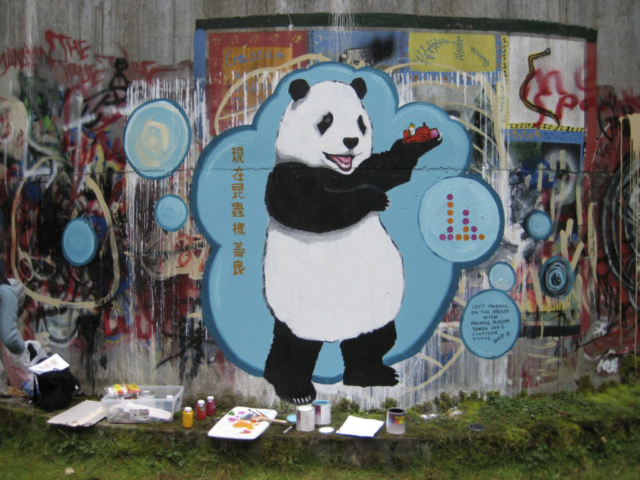 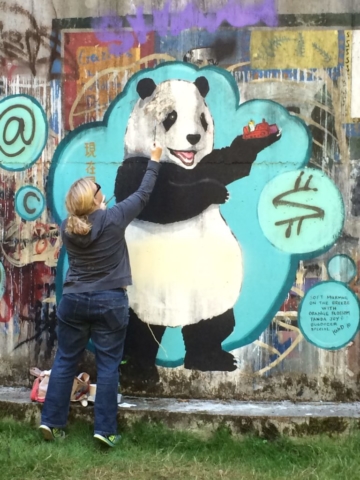